Delaware’s top public defender was named a civil liberty superhero this month by the ACLU of Delaware. 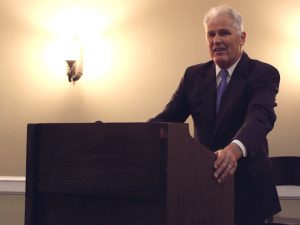 Brendan O’Neill, Chief Defender at the Office of Defense Services, was honored with the 2019 Kandler Award for his career in public defense. He shared the award alongside Charlotte King from the Southern Delaware Alliance for Racial Justice.

Brendan has been a long-time employee at the ODS and has led the office since he was first appointed by Gov. Jack Markell in 2009. Since his time as Chief Defender, the ODS has been recognized as one of Delaware’s Top Workplaces for nine years in a row.

“Brendan is truly the most positive human being I’ve ever had the privilege to know or work with,” O’Connell said. “He brings an energy and a positivity to everything he does that just infects everyone whom he comes in contact with and that is really important in the work that we’re doing in our office.”

Congratulations to Brendan and Charlotte!