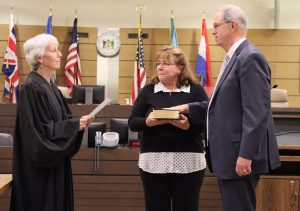 Kevin O’Connell was sworn in as Chief Defender of the Delaware Office of Defense Services on Wednesday, June 2, 2021 at 4:30 p.m. during a small ceremony at the Leonard L. Williams Justice Center in Wilmington. O’Connell was appointed to the position by Governor John Carney and confirmed by the Delaware Senate in May. He replaces Brendan O’Neill, who retired on May 31.

O’Connell is the state’s fourth Chief Defender. He has been with the ODS since 2005, most recently as the head of the New Castle County Division and head of the office’s Superior Court Unit. Prior to that, O’Connell was in private practice. O’Connell is a Fellow of the American College of Trial Lawyers and a founding member of the Delaware Association of Criminal Defense Lawyers. He is a graduate of Vanderbilt University and Widener University Delaware Law School.